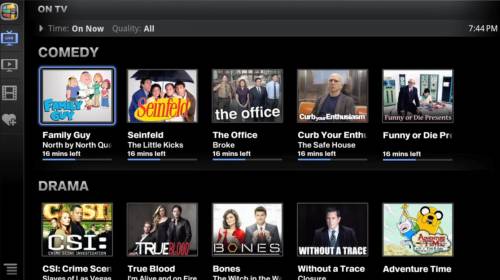 Google will start rolling out a huge software update to devices running Google TV starting next week. While Google describes the software as a way of bringing web content to your TV, the software update can perhaps best be described as Android redesigned for a big screen and a remote control.

One of the key updates is support for the Android Market. Most Android apps aren’t really designed for use on devices that don’t have touchscreens, but Google says 50 developers have already created apps that will work with Google TV, and that number could grow.

There’s also a new app for browsing for TV shows and movies without using the search box. And the YouTube interface has been retooled.

While Google TV 2.0 will bring apps such as Pandora and CNBC to the big screen, the big question is whether you’ll be able to use the box to actually, you know, watch TV. Sure, there are Netflix and Amazon apps. But you have to pay to use those services.

So far a number of major TV networks as well as Hulu and Fancast have blocked Google TV — which means some of the best content available from a standard web browser is not available from Google TV.

The software update will probably be welcomed by the handful of folks that already spent good money on Google TV set top boxes — but whether it will be enough to help Sony or Logitech sell more devices remains to be seen.

One reply on “Google TV 2.0 coming next week, brings apps to the TV”