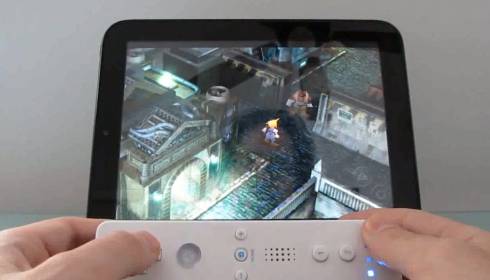 The HP TouchPad makes a reasonably good gaming device whether you’re running webOS or Android. There are a number of high quality webOS games for the tablet including Angry Birds and GUN BROS. Installing Android opens the TouchPad up to thousands of additional games that are available in the Android Market — although you may experience a few glitches here and there with apps that don’t support the tablet’s hardware.

There are also some excellent gaming console emulators available for Android, which allow you to run Nintendo, Gameboy, or even Playstation games on an Android device. You won’t find many of these emulators in the Android Market anymore, but there are still a few left. Others are available from SlideMe or other third party app stores.

Game console emulators aren’t illegal in and of themselves. But downloading and installing ROMs for commercial games may be. The polite thing to do if you don’t have the ability to rip your own games is to only download games that you’ve already purchased… although that doesn’t necessarily make the process any safer in the eyes of the law. So proceed at your own discretion.

I’ve tested a few emulators and they seem to work very nicely on the HP TouchPad — although not all games of the games designed for older gaming systems look great on a 1024 x 768 pixel display.

I’ve also found that it can be hard to play some games using on-screen controls. Since there’s no tactile feedback, it’s sometimes hard to know if you’re pressing the correct key without looking. That might not be a problem with turn-based strategy games or some role playing games, but it can get you killed or driven off the road pretty quickly in a first person shooter or a racing game.

I happen to have a Nintendo Wii in the house, so I grabbed a Wiimote and tried out the free Wiimote Controller app.

It took a few minutes to figure out how to pair my controller with the tablet properly — while most tutorials I’ve seen say to hold down the 1 and 2 buttons simultaneously and then tap the “Init and Connect” button in the Wiimote Controller app, that didn’t work for me.

Instead, I removed the battery cover and pressed the reset button on my Wiimote and then initialized and connected. That did the trick.

Anyway, after that all I had to do was tap the Select WiiControllerIME button to set my Wiimote as the default keyboard on the tablet and fire up a game emulator.

Using the FPSe Playstation emulator, I tapped the Menu button, chose the Settings option, and then Input. From there you can press the Hardware keys option to manually map your Wiimote buttons so that you can use it to control a game.

Your results may vary depending on the emulator or video game you’re using, but I find that pairing the Wiimote with the tablet makes games that weren’t designed for touch-based controls much easier to play. On the other hand, if you go this route you might find yourself carrying around a tablet, a controller, and maybe even some sort of a stand to prop up the tablet — which makes the whole kit a little less portable.

4 replies on “Classic gaming on the HP TouchPad with Android, a WiiPad, and a console emulator”