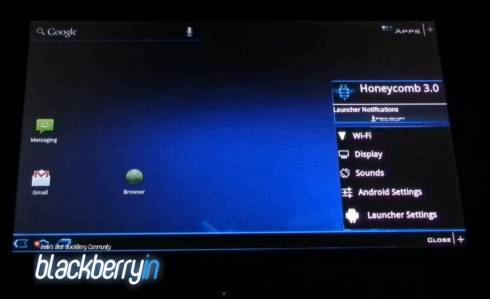 You can’t just fire up the Android Market to download apps either. Instead you need convert an Android APK file into an app that can run on the PlayBook — but it’s actually very easy to do that using the BlackBerry Packager for Android. In fact, you don’t even need to be the original developer of an app to convert it.

So it should come as no surprise that PlayBook users have been spending a lot of time over the last few days converting Android apps into PlayBook apps. You can find a lengthy list of apps available for installation in a public Google Doc.

Not every app works properly on the PlayBook. Some games, for instance dont’ work properly. But surprisingly a number of Android Launcher apps do work.

These apps are often referred to as home screen replacements for Android, since they let you replace the default Android home screen with a new one with a different look or different features. By installing a Launcher app on the BlackBerry PlayBook, you can essentially interact with the tablet as if it were an Android device rather than a BlackBerry tablet.

You can customize a list of apps on your home screens, view recent apps, or perform other actions associated with the launcher app. The folks at BlackBerryIn have posted a video showing how the tablet works when you install Honeycomb Launcher or ICS Launcher — apps that are designed to look like the default application launchers in Android 3.2 Honeycomb or Android 4.0 Ice Cream Sandwich.

There’s probably not a lot of reason to use an Android app launcher on a BlackBerry PlayBook unless you really hate the default app launcher. But if you want to convince your friends that you’ve installed Android on the tablet instead of PlayBook OS 2.0, I suppose this trick could help you do that.

Note that you’re not actually “running Android” if you install one of these app launchers. Instead, you’re still running BlackBerry PlayBook OS 2.0 which is based on QNX. But the operating system includes a Dalvik Virtual Machine which RIM calls an Android App Player which lets you run Android apps as if they were native apps — and that includes launchers. So you can launch an Android app launcher from your BlackBerry app launcher… just like any other app.

But these app launchers are just a few of the hundreds of Android apps users have already tested on the PlayBook. While there really aren’t all that many high quality native apps for the tablet available in the BlackBerry App World, it looks like support for Android apps really could be a game-changer for the PlayBook.

Unfortunately, I suspect that meany of the apps that community members have ported won’t be made available through the official App World anytime soon, which means that Android developers will have to take the initiative to submit their own apps… or the App World may remain a barren wasteland while a community of tinkerers continues to make the PlayBook more useful only for geekier users that are comfortable with venturing outside of the official app store.

The BlackBerry PlayBook is available from select retailers for $299.99 and up, although technically it still carries a list price of $499.99.

3 replies on “BlackBerry PlayBook (almost) transformed into an Android tablet”