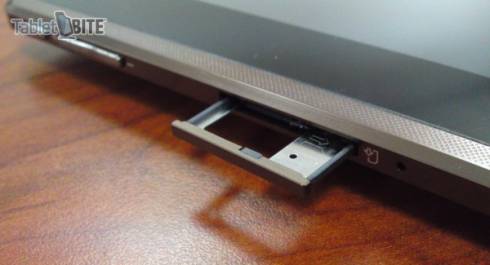 Asus is already starting to promote the Eee Pad Transformer 2, but the company hasn’t stopped updating the original Transformer. The folks at Tablet Bite got a chance to check out a new 3G capable version of the Android tablet. It’s reportedly due to hit the streets in November or December.

The 3G Transformer has room for a full-sized SIM card slot  on the same side of the tablet as the volume rocker. That’s pretty much the only thing that sets it apart from the WiFi-only versions of the tablet which have been available since earlier this year.

The Asus Eee Pad Transformer has a 10 inch, 1280 x 800 pixel IPS display, a 1 GHz NVIDIA Tegra 2 dual core processor, and 1GB of RAM. It’s available with 16GB or 32GB of storage. Asus also sells an optional keyboard docking station which lets you use the tablet like a laptop. The dock also has an independent battery, which nearly doubles your battery life when docked.

The European model will cost 100 Euros extra for 3G, so there’s a good chance that the US version will run about $100 more than a WiFi-only model. That would set the base price for a 16GB model at around $499 — unless a US wireless carrier decides to offer the tablet at a subsidized price to customers that sign up for a service contract.