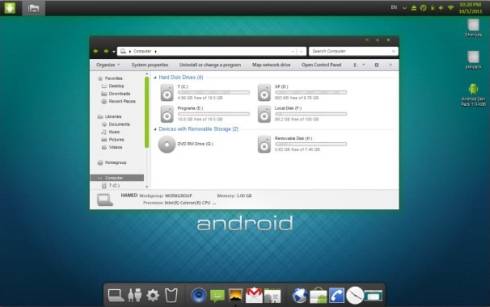 Windows 7 has a relatively simple user interface, but have you ever wished it looked a little more like Android? Deviant Art’s hameddanger has put together an Android Skin Pack that gives Windows 7 a little bit of an Android-inspired makeover.

The utility doesn’t let you run Android apps on a Windows computer, but it moves the taskbar to the top of the screen and gives it a bit of an Android status-bar style look. Icons for the battery, wireless, and audio are converted into Android-style icons, and the whole user interface looks a lot more… green.

The transformation doesn’t stop at the desktop and taskbar though. Colors, icons, and other graphics have also been tweaked in the Start Menu, Windows Explorer, and Control panel. For some reason there’s even an Android icon in the Windows System information window.

The Icon Pack also installs the free RocketDock application launcher for Windows. RocketDock gives you an OS X-style app launcher which you can use instead of the Windows Start Menu. It’s not exactly the same as the Android app drawer, but there’s really only so much you can do to make Windows look like Android, I suppose. You can uninstall RocketDock if you decide you don’t want it.

Note that while the Android Skin Pack is easy to install — there’s a single executable file — some users have had problems uninstalling it. If you want to take the skin pack for a spin you should probably create a system restore point and backup your system first.