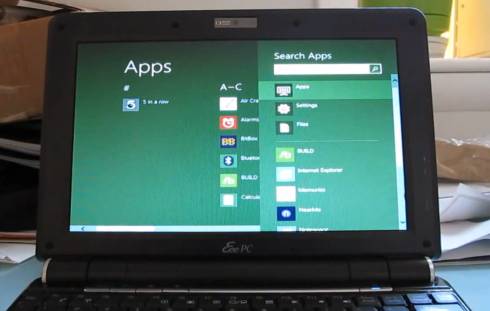 Microsoft has made it clear that Windows 8 will be designed to work as well on touchscreen devices including tablets and all-in-one computers as on traditional desktop and laptop computers. One of the keys to this strategy is a new “Metro style” application framework for touch-friendly software. Developers will be able to write Desktop style or Metro style apps — or code software that’s equally at home in either desktop environment.

But it appears that Microsoft will treat Metro apps differently in a few ways. Not only are Metro apps designed to run in full screen and designed to be used with your fingertips — they will also be distributed exclusively through the Windows Store. That’s Microsoft’s new app store that will launch with Windows 8.

That means Microsoft will be in a position to verify that apps work properly with the Metro user interface, and hopefully that the apps are devoid of spam and malware. It also means that Microsoft will be able to take a 30 percent cut of any revenues — much as Apple, Google, and other app store providers already do.

Enterprise customers and developers will be able to side-load Metro apps without using the Windows Store, and I suspect we’ll see some sort of jailbreak tools arise eventually that allow anyone to hack their way to Metro style freedom. But for casual users, the Windows Store will be the only place to install Metro apps… at least at launch.

It’s an interesting approach. Microsoft is effectively treating distribution of Metro apps the same way it treats Windows Phone 7 apps for mobile devices (or the same way Apple treats iOS). But Windows has long been a much more open platform, and it will be interesting to see how users and developers react to the new approach. Even Apple doesn’t require users to download Mac apps from the recently launched Mac App Store. It’s just an option.