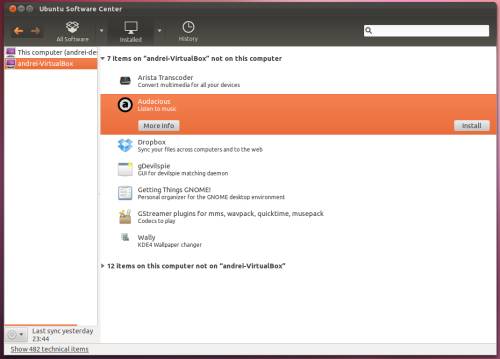 In a few weeks Canonical will release Ubuntu 11.10 Oneiric Ocelot. But you can already install the latest beta to check out most of the new features. Yesterday the developers released Ubuntu 11.10 beta 2, and while it still has a few rough edges, it gives us a pretty good idea of what to expect from the next major version of the popular Linux-based operating system.

One of the key changes is that Ubuntu will no longer come with the Synaptic Package Manager for downloading and installing software. You can still install Synaptic if you want, but instead the default package manager/app store is the Ubuntu Software Center — and it has one pretty neat new feature. You can synchronize your installed apps across multiple computers.

The feature, based on the OneConf tool, will be able to keep track of all the programs you’ve installed on various computers. If you install an app on your desktop, you can easily grab it for your laptop as well.

Synchronization work with apps downloaded from the Ubuntu Software Center, so if you manually install software on one machine you’ll need to manually install it separate computers as well. But it’s still a pretty neat addition to Ubuntu’s bag of tricks.

Ubuntu 11.10 beta 2 also includes an updated kernel, the latest versions of LibreOffice, Firefox, and Thunderbird, and some other changes.

via Web Upd8 and Softpedia

One reply on “Ubuntu 11.10 will sync your installed apps across computers”