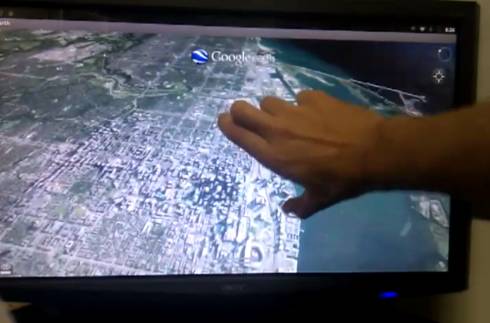 Google Android may have originally been designed to run on phones small enough to fit in your pocket, but it turns out the operating system works pretty well on 7 and 10 inch tablets as well. But why stop there? Martin Drashkov couldn’t think of a good reason, so he started to build an Android system with a 23 inch multitouch display.

He says it took about $600 worth of off-the-shelf parts to build his 23 inch “Android MegaPad.” It may not be as portable as a smartphone or tablet, but there’s no denying that Google Earth and Fruit Ninja look pretty awesome on a big screen.

As Drashkov points out, the larger display could also open the door to apps with different use cases than mobile apps. For instance two people could play the same game or collaborate to create documents, musical compositions, or other projects using the same device.

I’m not convinced that big-screen Android computers are the next big thing, but it’s certainly an interesting demonstration.