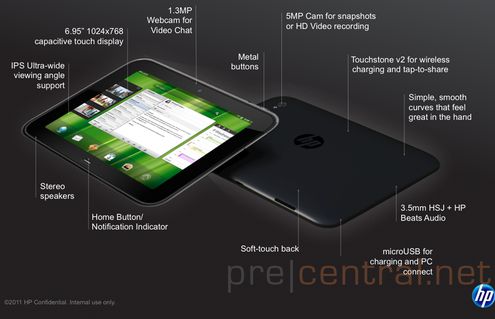 Just before HP decided to pull the plug on its webOS smartphones and tablets this summer, the company had been preparing to launch a 7 inch tablet called the TouchPad Go. It would have looked a lot like the 10 inch TouchPad tablet which made a splash only after HP cut the price to $99. But you know… it would have been smaller and stuff.

Now the folks at PreCentral have managed to get their hands on some documents that paint a pretty good picture of the tablet that never made it to market.

What you’re looking at is the HP TouchPad Go. It would have sported a 7 inch, 1024 x 768 pixel IPS display, a 1.3MP front-facing camera, a 5MP rear camera, stereo speakers, and metal buttons. While the larger TouchPad has a home button placed on one of the shorter edges (suggesting you might want to hold the tablet in portrait orientation), the TouchPad Go had a home button along one of the longer sides, for ease of use in landscape mode.

The little guy would have shipped with a 1.5 GHz Qualcomm Snapdragon dual core processor. It’s actually the same chip used in the larger TouchPad, but originally HP had underclocked the processor to run at 1.2 GHz. The rear-facing camera would also have been new. The original TouchPad only has a front camera.

It looks like HP was also planning to pack the TouchPad Go with a GPS receiver — something that wasn’t available on any of the 10 inch models that were released.

The device would have had 1GB of RAM, and 16GB to 32GB of storage. It would have weighed about a pound and measured about half an inch thick, making it a little easier to hold than is big brother.