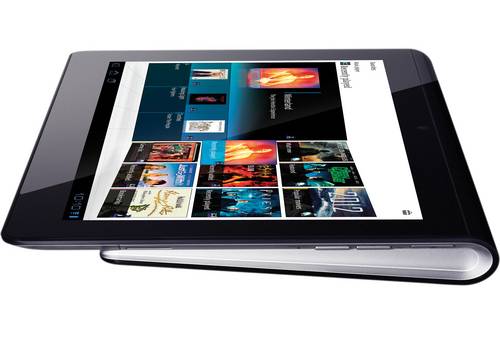 The Sony Tablet S officially goes on sale in the United States today. Technically it’s been available from a few retailers for a few days already — HSN started offering the tablet on Sunday, and I spotted one at B&H in New York on Wednesday. But today is officially launch day, and you can pick up the tablet for $499 and up from a number of stores including Amazon

The best price I’ve seen is at Abe’s of Maine, where you can use a Dealnews coupon to get the tablet for $485.

There are a few things setting the Tablet S apart from other Android tablets. The first is the unusual shape shape with a “fold” on the back that’s meant to make the tablet look a bit like a magazine that’s been folded back. The wedge shape makes the tablet easy to hold in one hand — assuming you’re holding it in portrait mode. In landscape orientation it’s a bit tougher to comfortably hold.

Sony also loads the tablet with some custom apps including the ability to play some older Playstation games, music, movie, and eBook apps, and a universal remote control app that works with an IR port to let you control your home media gear from the tablet.

I’ve only spent a few minutes with the tablet, and while the unique case design is interesting, the tablet has a cheaper plastic feel than I had been expecting. The door covering some of the ports is connected by a very flimsy piece of plastic, and it feels like it could easily break. And the power and volume buttons are awkwardly placed in a way that could make them very difficult to hit without looking directly at them.

Still, the Sony Tablet S offers a few features you won’t find on any other big name tablet yet including the Playstation and IR remote control capabilities, so I suppose Sony deserves some points for its first Android tablet.

2 replies on “Sony Tablet S now available in the US”