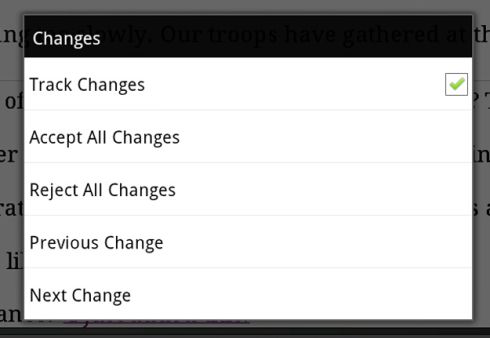 SoftMaker has been making office software for mobile apps for a very long time. The company’s Windows Mobile apps offer some of the best support for Microsoft Office documents you’ll find on any mobile device. But SoftMaker Office was originally designed back when mobile phones and PDAs were meant to be used with a stylus. Now the company is retooling the office suite for use on finger-friendly Android phones and tablets.

SoftMaker Office for Android has been in private beta testing for months, but GottaBeMobile’s KT Bradford took a recent build for a spin to see how the word processing app TextMaker handles a large, complex Word document with track changes.

As it turns out, the answer is pretty well. The app was able to detect all changes, jump from one to the next, and accept or reject changes. New changes can also be tracked, and users can leave comments — although there’s currently no easy way to search for comments or view existing comments.

There’s a good chance it will be the most advanced office suite available for Android once it launches… but it may not come cheap. SoftMaker Office for Windows Mobile costs nearly $80.

One reply on “SoftMaker Office for Android in the works”