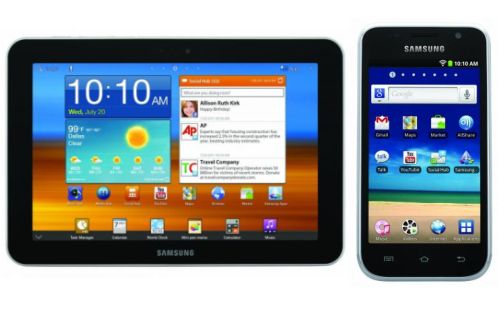 Samsung has anounced official US prices and launch dates for its upcoming 8.9 inch tablet and 4 and 5 inch portable media players. The Samsung Galaxy Tab 8.9 goes on sale in the States for $469 and up starting on October 2nd. The Galaxy Player 4.0 and Galaxy S 5.0 handheld media players will be available starting October 16th for $229 and up.

Or at least that’s what the press release says. But the truth is that we’ve already seen some of these devices go on sale. While Best Buy missed the original September 22nd ship date for the 8.9 inch tablet, the device is already available for pre-order. And the Galaxy S WiFi 5.0 was briefly available from bargain website Woot for $170 earlier this month.

The Galaxy Tab 8.9 is basically a smaller version of the Galaxy Tab 10.1 tablet. Both tablets have 1280 x 800 pixel displays, 16GB to 32GB of storage, and Google Android Honeycomb software with Samsung’s TouchWiz interface running on top. They also have the same 1 GHz NVIDIA Tegra 250 dual core processor.

The Samsung Galaxy S WiFi 4.0 and 5.0 look like smartphones, but they don’t feature cellular capabilities. You won’t be able to make phone calls or surf the web unless you have a WiFi signal (or a voice over IP app such as Skype). But both devices run Google Android 2.3 Gingerbread and feature full access to the Android Market which means that they should be able to run most of the apps available for Google’s operating system.