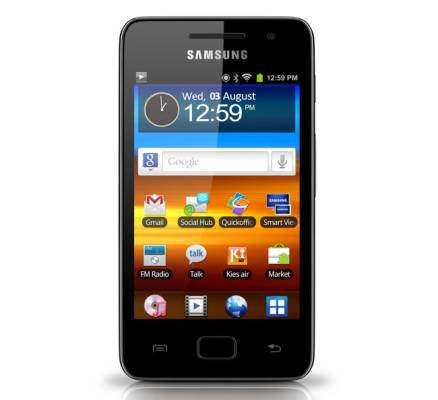 The Samsung Galaxy WiFi 3.6 looks like a smartphone, but it’s not. Instead it’s a handheld device that runs Google Android, offers WiFi connectivity, and does just about everything an Android phone does — except for make phone calls or surf the web over 3G or 4G.

It’s kind of like Apple’s iPod touch, except it runs Android.

Samsung has been showing off similar devices since last year, but few have ever made it to market. This new model is actually expected to make it to market in October… in the UK at least. It will hardly the first Android version of an iPod touch to hit store shelves, but it certainly looks like one of the most polished devices in its class.

There’s a front-facing VGA camera and a 2MP camera with a Flash on the rear. The device supports 802.11b/g/n WiFi and will be available with 8GB or 16GB of storage. It also has a microSD card slot for expansion.

5 replies on “Samsung Galaxy WiFi 3.6 is an Android handheld (not a phone)”