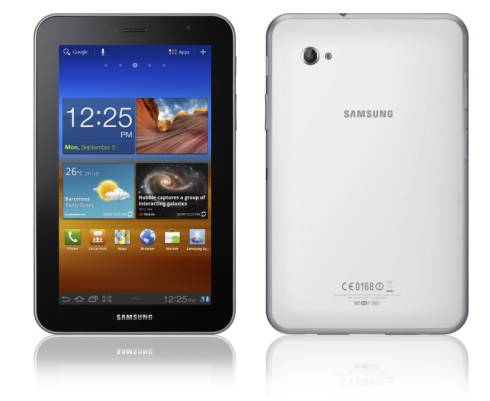 Samsung has unveiled a new 7 inch Android tablet called the Samsung Galaxy 7.0 Plus. While it might look like Samsung is just trying to be trendy, what with Amazon, ViewSonic, Acer, and Motorola bringing 7 inch tablets to market. But Samsung’s first Android tablet was actually a 7 incher. The company launched the original Galaxy Tab in the prehistoric era of 2010, and it had a 7 inch, 1024 x 600 pixel display.

In some ways, the new Galaxy Tab 7.0 Plus isn’t all that different from its older sibling. Both have 7 inch, 1024 x 600 pixel displays and cameras on the front and back of the device for video chatting or snapping photos or videos.

But the new model is thinner and lighter than the original, measuring just 0.4 inches thick and weighing 0.76 pounds (compared with 0.5 inches and 0.84 pounds for the older tablet). It should also be faster, thanks to a 1.2 GHz dual core processor. The original Galaxy Tab had a 1 GHz Samsung Hummingbird single core chip.

The Galaxy Tab 7.0 Plus also features Google Android 3.2 Honecyomb and Samsung’s TouchWiz software with custom icons, home screen widgets, and apps — including mini apps such as a calculator and calendar that open up without minimizing the app you’re currently viewing.

The new tablet supports 802.11a/b/g/n WiFi and Bluetooth 3.0 wireless connections, has a 4000mAh battery, 1GB of RAM, 16GB to 32GB of storage, and a microSD card for expansion. It can handle 1080p HD video playback and supports a wide range of video codecs including H.264, DiVX, Xvid, and MKV. The tablet can also record 720p HD video.

While a higher resolution display would be nice, the 7 inch 1024 x 600 pixel screens I’ve seen have generally looked pretty sharp.

The tablet will be available either with a white or metallic gray back panel — much like the Samsung Galaxy Tab 10.1.

Samsung says the Galaxy Tab 7.0 Plus will roll out globally starting in late October. There’s no word on pricing, but the tablet has a HSPA+ modem, which would suggest it will be available from wireless carriers, possibly with subsidized prices for customers willing to sign up for service contracts.

One reply on “Samsung Galaxy 7.0 Plus: Thinner, lighter, faster”