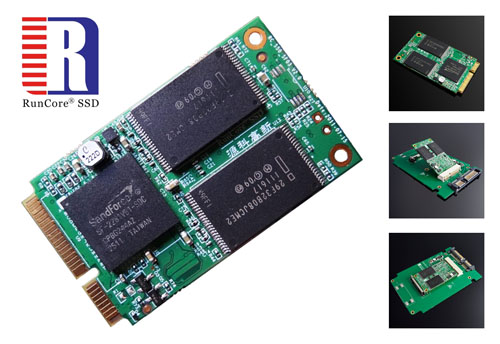 Right now only a small number of systems actually use the mSATA standard and most are only rated for SATA II. But the new T50 mSATA drive includes a transposer adapter that will let you install the drive in a machine that uses a standard SATA interface. That will allow you to use the new drive even if you don’t have an mSATA interface (although you can probably find other options that will work at least as well).

The SSD Review has an extensive review of the 120GB card, but the announced specifications of the T50 indicate sequential transfer rates of up to 550 MB/s for reads and 470 MB/s for writes, as well as maximum I/O performance of 60,000 4 KB random write IOPS and 35,000 random read IOPS, and comes in capacities of 30GB, 60GB, and 120GB  with a 3 year (may have been changed to 2 year limited) warranty.

However, keep in mind when shopping for this product that RunCore also makes other mSATA drives, along with the early netbook Mini PCIe SSDs. If you want the top speeds you’ll need to pay the higher prices, but the RunCore I50 is no slouch either.

The I50 mSATA SSD offers a sequential transfer rates of up to 280 MB/s for read and 270 MB/s for write operations as well as a maximum I/O performance of 45,000 4 KB random write IOPS and 30,000 random read IOPS.  It’s intended for tablets and light tablets that are only capable of SATA II (3Gbps).

The RunCore Lite mSATA is based on the SMI controller, which is intended for lower cost, 16GB is priced at $28 while the 32GB model costs $38, OEM applications like netbooks, MIDs, tablets and other similar products.