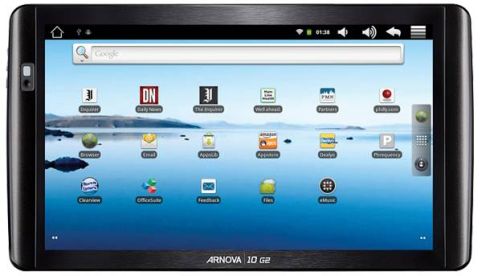 We could soon see more newspaper publishers offering Android tablets to digital news subscribers. TigerDirect and Archos rolled out a new program called PubTab this week that will allow publishers to customize the software on an inexpensive 10 inch Android tablet that can be bundled with a subscription package.

If that all sounds kind of familiar, it’s because this is the program that launched this month in Philadelphia. A pilot program is being run by Philadelphia Media Network, allowing customers to pick up an Archos 10 G2 tablet for as little as $99 when they sign up for subscriptions to three digital news applications.

The Archos 10 G2 features a 1024 x 600 pixel capacitive touchscreen display and a 1 GHz single core processor. It runs Google Android 2.3 Gingerbread, has a camera and 4GB of storage. It recently went on sale for $200, so you the Philadelphia newspaper version is about half price for subscribers.

Out of the box, the tablet doesn’t include the Google Android Market, run the latest tablet-optimized version of Android, or have the fastest processor around. But it’s pretty cheap as a $200 tablet.. and even cheaper if you bundle it with a newspaper subscription — assuming you were planning on spending money on a newspaper anyway.

It would be nice to see TigerDirect sign up a few other partners to provide customized tablets with better software, better build quality, or better specifications. But for now it looks like this is a TigerDirect/Archos collaboration, and I suspect that means we’ll soon see the Arnova 10 G2 tablet pop up in other newspaper circulation areas soon.

4 replies on “More newspaper tablets on the way, thanks to TigerDirect and Archos?”