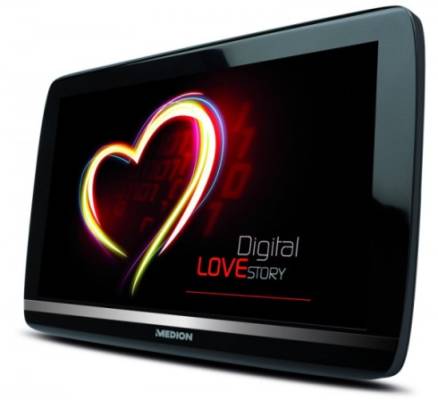 Consumer electronics company Medion is launching a new Android tablet called the Medion LifeTab. I’d be surprised if it’s ever released in the US, as Medion’s devices tend to show up primarily in Europe, but it’s expected to launch in time for the holidays in Europe for about 399 Euros.

The Medion LifeTab has a moderately unusual design with a rather large screen bezel and rounded edges. The rest of the specs look pretty typical.

The tablet has a 1 GHz NVIDIA Tegra 2 dual core processor, 10 inch, 1280 x 800 pixel capacitive multitouch display, and Android 32. operating system. It has 32GB of storage plus a microSD card slot for expansion, a 5MB rear camera and 2MP front camera, and a 24.7 Whr battery which is good for up to 10 hous of run time.

You also get HDMI output, GPS, 802.11b/g/n WiFi and quad-band HSDPA. Medion also loads up the tablet with a few extra apps including Documents To Go and LifeTab media software.