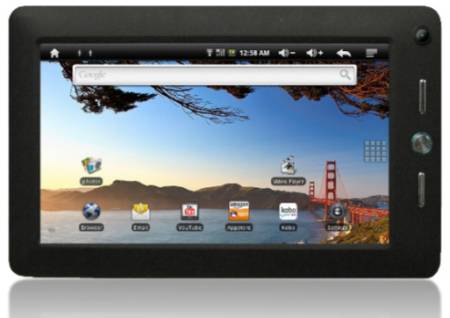 Maylong has a history of cranking out budget Android tablets. Last year Walgreens sold a version of the Maylong M-150 for $100, at a time when cheap Android tablets weren’t nearly as common in the US as they are today. Maylong’s tablets are aimed at customers looking for a cheap device for surfing the web or running apps who don’t care about having the fastest processor or longest-lasting battery.

Now it looks like Maylong is getting ready to launch a new tablet called the Maylong M-260. It showed up at the FCC website today.

There aren’t many details about the tablet revealed in the user manual or photos, but it does appear that the Maylong M-260 is running Google Android 2.3 Gingerbread or earlier. It has three buttons on one side of the screen, for Home, Menu, and Back functions, as well as a front-facing camera and what looks like a speaker on the rear.

The tablet also appears to ship with access to the Google Android Market, which means you should be able to easily download and install thousands of third party apps without using an alternate app store.

You can also see a mini-USB port and microSD card slot as well.

There’s no word on the pricing or release date, but I’d be shocked if this tablet sold for more than $150, unless it turns out to have a state-of-the-art processor, display, or touch panel, which I doubt it will.

One reply on “Maylong M-260 Android tablet hits the FCC”