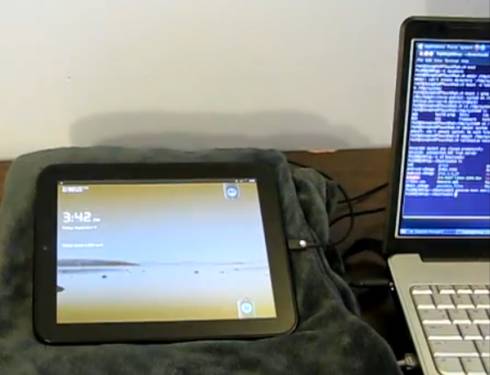 After weeks of internal strife, the members of the TouchDroid team called it quits yesterday, effectively putting an end to that particular effort to port Google Android to run on the HP TouchPad tablet. The one good thing to come out of the ashes is that former TouchDroid member fnj001 publicly released everything the team had put together so far — meaning anyone with an HP TouchPad can now install Android on their tablet.

Unfortunately right now, there’s really not much reason to install Android on the tablet, since it doesn’t yet support WiFi or the hardware buttons on the tablet. But if you want to try it out anyway, the tools are available. Fnj001 had already posted instructions, but today he also posted a video walkthrough.

Update: You can now install a much more functional version of Android on the HP TouchPad, thanks to the folks at CyanogenMod. It’s still a little rough around the edges, but I’ve posted step-by-step instructions for installing CyanogenMod on the TouchPad tablet.

The process basically involves partitioning the storage space on your tablet, copying the latest Android build to the device, unzipping the system file, and then booting into Android. There are also instructions for turning the power button into a “Home” button and a demonstration of how to reboot the device into webOS.

While TouchDroid has gone belly up, the folks at CyanogenMod are still working to bring Google Android 2.3.5 to the tablet, and they’re getting awfully close to a fully functional version. In fact, the only reason the TouchDroid project got the touchscreen drivers working is because they copied them from CyanogenMod.

HP recently discontinued the tablet, but when the company started selling off remaining inventory for prices as low as $99 the TouchPad became awfully popular (and hard to find in stores). The tablet has a 1.2 GHz Qualcomm Snapdragon dual core processor, a 9.7 inch, 1024 x 768 pixel display, and weighs about 1.6 pounds.

The HP TouchPad ships with the webOS 3.0 operating system, and webOS is actually quite nice — but there aren’t very many high quality third party apps for the platform yet. Now that HP has canceled the TouchPad as well as the Veer and Pre smartphones, there’s not really all that much reason for developers to write apps for the platform unless HP can find another hardware maker interested in licensing the software, so installing Android could be one of the best ways to make the tablet more useful.

I’ve also noticed that webOS feels a bit slow at times on the tablet. While animated effects are nice and smooth, and the web browser does a great job of rendering web content (including Adobe Flash), it takes much longer to launch apps on the TouchPad than it does on most Android or iOS devices I’ve tried. I’m looking forward to seeing whether Android seems faster on the same hardware.

Update: ReverendKJR has posted another how-to video which may be easier to follow: