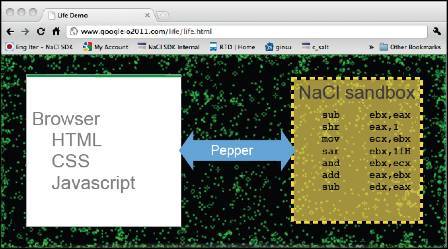 Google has released an updated version of the Chrome web browser for Windows, Mac and Linux with two major new features that blur the line between web apps and desktop apps. Both features have been available in beta versions of Chrome for a while, but with today’s release they’re available in the Stable channel — meaning they’re open to everyone.

In other words, developers can now use the same tools to write apps for a desktop computer, a phone or tablet, or a web browser, offering similar performance in each platform. The new features could theoretically help solidify the web browser’s place as the most important app on your computer, since the browser could actually replace some of the games or other apps you might normally install and run from your desktop.

Native Client and Web Audio will also help make Google’s Chrome OS platform a little more attractive by adding support for native-app quality software to the operating system which is designed only to run a web browser.

The latest stable build of Chrome OS for Mac also includes some enhancements for OS X Lion to better fit the look and feel of Apple’s latest desktop operating system.