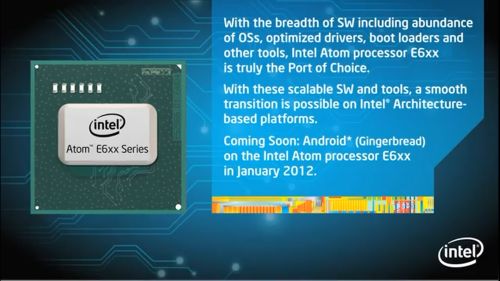 Google’s Android operating system is based on open source software, so while it’s optimized to run on ARM-based chips, it’s no surprise that people have been adapting the software to run on x86 processors for years. There’s an independent development project called Androidx86 that’s been allowing people to install Android on notebooks and other personal computers for years. And we’ve even seen a few tablet and netbook makers release devices which can dual boot Windows and Google Android.

But so far neither Google nor any major x86 chip maker have officially supported Android for x86 processors. Sure, Google TV runs on devices with Intel chips, and Google TV is based on Android, but right now the software doesn’t offer the full Android experience such as support for the Android Market.

Now Intel is promising that Google Android 2.3 Gingerbread will be available for Intel Atom E6xx series processors in January, 2012. Gingerbread is the same version of Android designed to run on smartphones. 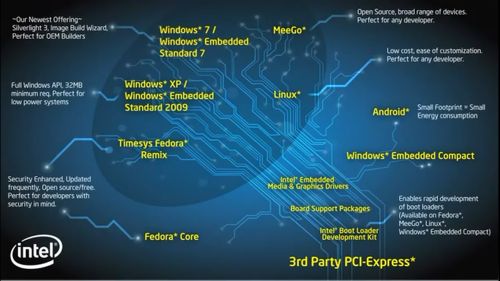 It’s interesting that Intel is talking about Gingerbread and not Honeycomb or Ice Cream Sandwich though… since those are the versions of Android that will be optimized for tablets and other devices, and the upcoming version of Google TV which will offer support for third party apps from the Android Market will have more in common with Honeycomb and Ice Cream Sandwich than Gingerbread.

One reply on “Google Android for Intel Atom coming in 2012”