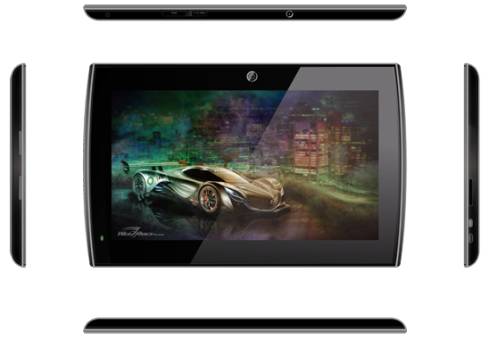 GIT Media has introduced two new Android tablets which have a few unusual features. First, the Android 3.0 Honeycomb tablets come with 250GB hard drives instead of the 8GB to 64GB of flash storage that’s much more common these days. Second, they have 1280 x 768 pixel displays instead of the typical 1280 x 800 pixel displays. And finally, have you ever heard of Git Media? Neither have I.

On paper the tablets look pretty good, but as SlashGear notes, there’s a bit of cause for concern. Instead of an MSRP (manufacturer’s suggested retail price), for instance, the product pages list MRSPs… whatever those are. The About page on the website is also “coming soon,” and the Customer Support page is just an email form.

The Surge features a 1 GHZ NVIDIA Tegra 2 dual core processor and a white case, while the Pro has a 1 GHz Samsung Exynos 4210 dual core chip and a black case. The rest of the specs are identical, including 1GB of RAM, WiFi, Bluetooth, GPS, a 5MP rear camera, and 2MP front camera.

No, I don’t have any idea why a company would release nearly identical products with different processor options for the same price, but if I had to choose, I’d probably grab the Exynos model. It’s the same processor that ships with the new Samsung Galaxy S II smartphone, and word on the street is that it’s really, really fast.