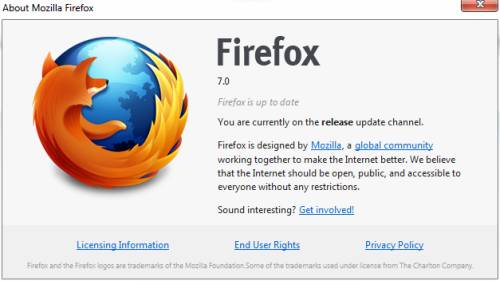 Mozilla has pushed out new versions of its popular Firefox web browser for personal computers and Android phones and tablets. The move from Firefox 6.0 to 7.0 isn’t quite as exciting as some earlier updates, since Mozilla is on a rapid-release schedule these days. But there are a couple of major improvements in Firefox 7.0 nonetheless.

The desktop browser for Windows, Mac, and Linux is designed to use memory more efficiently, open new tabs more quickly, and perform better when multiple browser tabs are open. HTML5 games and animations should also be faster when run in Firefox. If you’re using Firefox Sync to keep your bookmarks and passwords synchronized between computers, Firefox will also now sync changes more quickly.

The Android version of Firefox also includes HMTL5 improvements, support for copying and pasting a website into an email message, SMS, or any text field, and support for WebSockets API which developers can use to write web apps that perform better on Firefox.

You can download Firefox 7 for Windows, Mac, and Linux from Mozilla. The Android app is available from the Android Market.