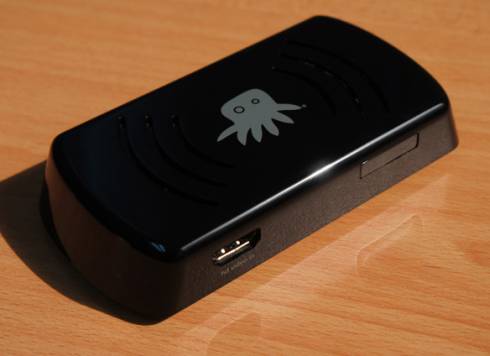 Chumby produces widget-powered software for little boxes that are sort of like glorified clock radios that can also view pictures, show weather forecasts, display Twitter updates, and perform a whole bunch of other tasks that your normal clock can’t since it’s not hooked up to the internet.

Now the company is doing the same thing for televisions with a little box called the NeTV. The idea is that you hook up this little box between your video source and your TV, and it will give you a version of the Chumby interface designed for the big screen. And it does this without interrupting your video.

For instance, you can watch a movie from your cable box, DVR, or what have you, and when a new Twitter message comes in, you’ll see a scroll across the bottom of the screen — if that’s the sort of thing you want to see while watching TV.

I’m not entirely sold on the whole we-now-interrupt-this-program-so-you-can-see-who-posted-a-message-on-Facebook idea, but I’ve often wondered why anyone would spend money on Chumby hardware when the little boxes don’t really do anything you couldn’t also do with a laptop computer or smartphone.

The NeTV, on the other hand, brings the internet to your big screen TV so you can surf the web from your couch without hooking up a full-fledged PC to your TV. For the right price, NeTV could be bigger than any Chumby product to date… even though it’s actualy smaller.

Chumby will make preview versions of the NeTV available to developers later this month. The box has an 800 MHz Marvell processor, support for video resolutions up to 1080p24, and 802.11g WiFi. It’s powered through a microUSB connection and you can either user a 7-button IR remote control or an Android app to control the software.