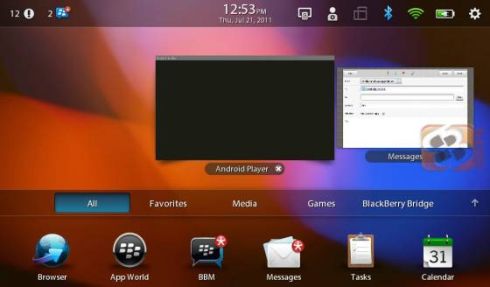 Research in Motion is taking two major steps to try to drum up some more interest in the company’s BlackBerry PlayBook tablet. The first is a series of price cut promotions allowing customers to snag the tablet for as little as $299. The second is a major software update that, among other things, will let users run Google Android apps on the tablet.

So opening the door to Android apps could make the tablet a much more useful device. There are hundreds of thousands of applications designed to run on Android phones and tablets, and once the Android App Player is available for the PlayBook, many of them will also work on RIM’s tablet.

The folks at Thinq have some more details though. RIM engineers apparently outlined some of the limitations at a recent event in Europe, and it looks like the PlayBook also won’t support apps that:

You may still be able to install some of these apps on a PlayBook, but they won’t run properly because the PlayBook doesn’t have all of the features you’d find in a true Android tablet. It won’t have Google Maps, Google’s in-app billing, or other functions, for instance.

All in all, there’s nothing particularly surprising about this news… but it’s good to see RIM talking about which apps won’t be supported in advance of the BlackBerry Tablet OS 2.0 software update so that we can temper our expectations.