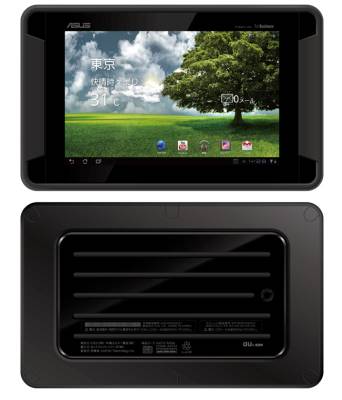 Japanese wireless carrier KDDI will soon offer a new Android tablet from Asus… and it’s one that sort of came out of nowhere. Asus hasn’t made any official announcements about the Asus TOUGH ETBW11AA in the West, so I’m guessing this one’s a Japanese exclusive for now, but the folk sat Impress got a chance to check out the new tablet.

It has most of the usual Android tablet specs including a 1280 x 800 pixel display, 1 GHz NVIDIA Tegra 2 dual core processor and Android 3.2 Honeycomb operating system. But it’s also the smallest Asus Honeycomb tablet to date, with a 7 inch display.

As the “Tough” name suggests, this new tablet also has a few semi-rugged features including a case that’s both water and dust-resistant. It also supports 4G WiMAX wireless broadband. Unfortunately the tough case also adds a little weight. The tablet weighs about 1.4 pounds and measures about 0.9 inches thick.

That wouldn’t be bad at all if this were a 10 inch tablet, but the Asus Tough is a little chunky for a 7 inch tablet.