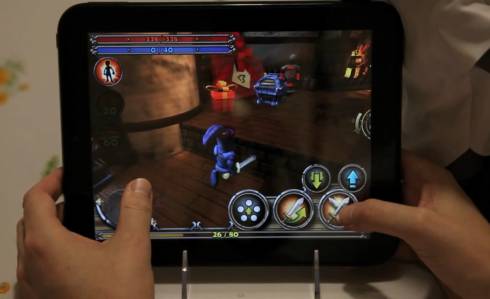 Update: You can now install CyanogenMod 7.1 on the HP TouchPad.

Today the team posted another video showing audio, video, 3D gaming, and much more. The team still hasn’t released their Android build for the TouchPad to the public, because there’s still some work to be done to make sure everything runs smoothly, but here are some of the things that have been accomplished so far:

The latest demo video shows off Dungeon Defenders and Home Run Battle 3D on the TouchPad. The only catch is that Dungeon Defenders doesn’t seem to know what to do with a screen that has a 4:3 aspect ratio. Some of the buttons on the right side of the display were cut off, which could be problematic. I don’t know if there will be an easy software fix that the CyanogenMod team can apply to address these issues or if we’ll have to hope that third party developers write apps that can handle the TouchPad’s 1024 x 768 pixel screen.

In previous updates we’ve also seen that the accelerometer works, and the touchscreen are fully functional.

CyanogenMod is working with Google Android 2.3.5, since the source code for Android 3.2 Honeycomb is not available. But the TouchPad doesn’t have the Back, Search, and Menu buttons that most Android 2.x devices use, so CyanogenMod has added their own on-screen buttons. It looks like they’ve also used the TouchPad’s Home button as an Android Home button, allowing you to exit any app and return to the home screen at the tap of a button.

The HP TouchPad features a 9.7 inch, 1024 x 768 pixel capacitive touchscreen display, a 1.2 GHz Qualcomm Snapdragon dual core processor, and 1GB of RAM. It comes with 16GB to 32GB of memory — and it didn’t sell very well when HP was charging $399 and up for the tablet. The company recently discontinued the TouchPad and started selling it for as little as $99, at which point it became a runaway success and sold out almost immediately.

The TouchPad is a pretty decent device, but it’s currently hampered by some of the limitations of the webOS software that comes preloaded. The OS feels a bit sluggish at times, and there aren’t nearly as many high quality apps available for webOS as for Android — which is why many people are looking forward to the public release of CyanogenMod’s Android port for the TouchPad.

It’s also possible to install Ubuntu Linux on the TouchPad.