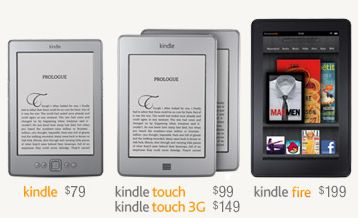 Amazon introduced three new Kindle devices this morning: two eBook readers and the Kindle Fire tablet which is designed to access music, eBooks, movies, and apps from Amazon’s digital content stores. All three devices are expected to ship in November, but you can place pre-orders starting today.

This 7 inch tablet sort of stole the show at today’s kick-off event. At $199 it’s the most expensive new Kindle device, but that’s a pretty remarkable price for a device which can do as much as the Kindle Fire can — even if it doesn’t come with full access to the Android Market or other goodies that you get from some competing Android tablets.

Instead, the Kindle Fire ties into Amazon’s digital media stores and runs a highly customized version of Android that puts that content front and center. The home screen looks like a book shelf with your books, movies, songs, and apps.

has a 6 inch E Ink display and weighs about 6 ounces. It has buttons below the screen and on the side of the device for navigation.

Amazon is offering two versions of the new Kindle. For $79 you can pick up a model “with special offers,” which is to say it will show sponsored ads as your screensaver.

The new Kindle has 2GB of storage space.

Amazon is launching its first E Ink Kindle with a touchscreen. It’s called the Kindle Touch

Since there are no buttons, just a touchscreen display, the Kindle Touch is the smallest 6 inch eReader Amazon has released to date. It actually weighs a tiny bit more than the new Kindle though, at 7.5 ounces.

The Kindle Touch has 4GB of storage, about 3GB of which is available to users. It includes speakers and a 3.5mm audio jack, a USB port, and 802.11b/g/n WIFI.

This model includes a 3G radio which allows you to download and read eBooks or magazines without a WiFi hotspot. The 3G service is available as a free add-on, with no service contracts or monthly fees, and it’s available in 100 countries.