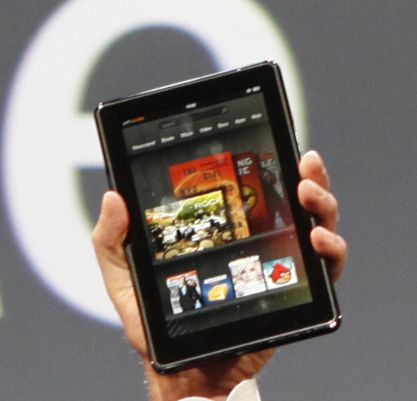 The long-anticipated Amazon tablet is almost here. The company is holding an event in New York City to officially introduce its 7 inch Android device this morning, but the folks at Bloomberg just couldn’t wait — and they’ve spilled some of the beans.

Here’s what we know so far: The device will be called the Kindle Fire and it will sell for $199 and run Google Android. But it will have a unique user interface that’s tied to Amazon’s music, video, and magazine content. BusinessWeek reports that Amazon can keep the profit margins on the tablet low because it’s hoping to make up the difference with app and media sales.

This is similar to the approach Barnes & Noble has taken with the NOOK Color eReader, which sells for $249. The difference is that Amazon also established an Android app store earlier this year, which means there are thousands of apps already available for the Kindle Fire, comapred with the a much smaller number of NOOK Color apps.

As you might expect from a device aimed at consuming media, there’s no camera or mic on the Kindle Fire. And while we’d been hearing rumors that Amazon would bundle an Amazon Prime subscription for free video streaming and 2-day shipping on goods ordered from Amazon, it turns out that the company will only be giving customers a 30-day free trial. That’s not particularly exciting, since Amazon offers anyone a 1 month free trial of the service — tablet or no tablet.