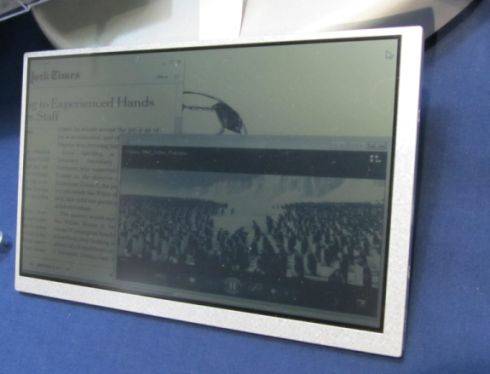 Pixel Qi has been producing sunlight readable LCD display technology for a couple of years. Founded by Mary Lou Jepsen, who also designed the sunlight readable displays used in the original OLPC XO Laptop, the company produces dual-mode screens that can be used with or without a backlight.

But while Pixel Qi has been showing off its impressive technology for the past few years, few products have actually shipped with Pixel Qi displays. The most prominent is probably the Notion Ink Adam, a 10 inch Android tablet from an Indian company which started shipping in limited quantities earlier this year. Other companies that are shipping netbooks and tablets with the screens are charging a very high premium for the technology, likely since they’re ordering screens in very limited quantities at very high prices.

While we haven’t seen many mainstream products with Pixel Qi screens in the west, the company tells me that some display panels are being shipped to some Chinese firms and there have also been some small shipments to specific niche industries (including the military). More details may be available in the future.

Now 3M has announced that it’s investing in Pixel Qi, a move which Pixel Qi says will help the company “develop its product offerings into volume consumer markets as well as digital signage and touch applications.”

In other words, it may provide the company with the funding it needs to finally ramp up production to the point where the costs of the sunlight readable displays can come down. Up until now, Pixel Qi has claimed that it could ramp up production quickly if a partner company placed a large order, since existing LCD display manufacturing facilities can be used to produce Pixel Qi screens. But so far there haven’t been any public announcements of such major orders.

The terms of the 3M investment haven’t been disclosed, so we don’t know how much money Pixel Qi has raised or what the announcement really means for the future of the company or its display technology. But it’s certainly good news for those that have been rooting for this little display company.