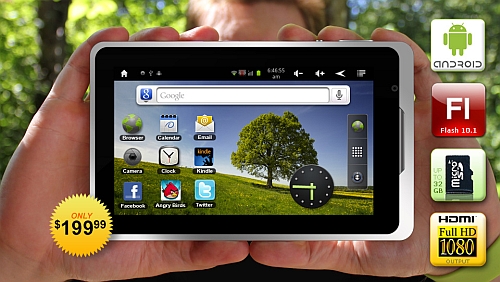 X10 is better known for its home automation and surveillance equipment, but the tablet market is still a bit like a frontier town — and anyone willing to stroll into town with a pair of six-guns can get in on the action. What does purchasing the $199 X10 AirPad get you? Let’s take a look at its specs.

Under the hood you’ll find a capable 1.2GHz Rockchip processor, 512MB RAM, 4GB of internal storage, 802.11 b/g Wi-Fi, 2 megapixel rear camera, and a 4000mAh battery. While the AirPad’s 7″ display only pushes out 480×800 pixels, the touchscreen is at least a capacitive unit — and likely an improvement over the resistive screens you’ll find in many other sub-$200 Android tablets. The AirPad also offers HDMI output and a full-sized USB port. On the software side, X10 has included Android 2.3 and Flash 10.1, and the AirPad even has access to the Android Market.

The specs are actually very similar to those of the Archos 7C, which beats the AirPad on storage with 8GB but falls short with Android 2.1 and a micro-USB port for expandability. It’s also $20 cheaper.

So is the X10 AirPad really the best tablet available under $200? Maybe not, but its release is yet another sign that retail prices for capable Android tablets are going to continue sliding.