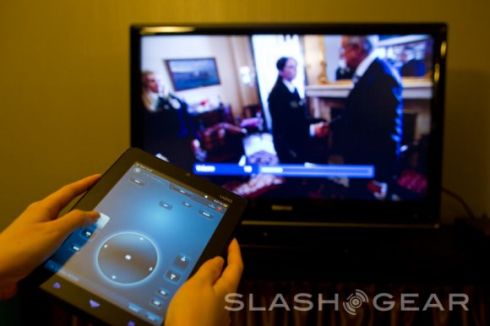 Available from some retailers for under $300, the Vizio Tablet isn’t exactly the cheapest Android tablet on the market — but it’s certainly not the most expensive. And surprisingly, given the relatively low price point, it might be one of the most innovative. Vizio packed a number of features into its first tablet that you won’t find on many competitors.

For instance, there are three speakers — allowing you to get stereo sound whether you’re holding the device in portrait or landscape mode. And there’s a built-in IR port that allows you to use the tablet as a universal remote control.

I had initially been under the impression that the Vizio Tablet was meant specifically to work with Vizio television sets running Google TV software — and it does work nicely with those devices. But the folks at Slashgear posted a detailed review of the tablet this weekend with more details, and it turns out you can also use the device as a universal remote to control most televisions, set-top-boxes, and other media devices such as Blu-ray players or cable boxes.

The tablet also supports WiFi, Bluetooth, and HDMI, so it has a nice range of connectivity options. Unfortunately it has just 2GB of storage space, which is a bit on the anemic side, and a custom software interface which might not appeal to those hoping for a more standard Google Android experience.

Slashgear also reports that the software feels slow and the screen can be unresponsive at times and the tablet notched some pretty awful scores in benchmarks — proving that not all 1 GHz processors are created equal.

The good news is that the tablet does include access to the official Google Android Market — something that’s unfortunately uncommon on tablets running Android 2.3 and below. A software update in the future could bring Android 3.x Honeycomb to the tablet as well.