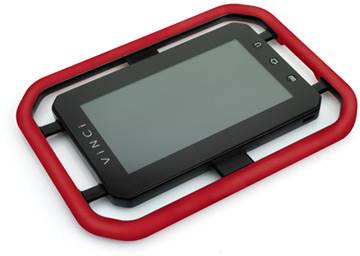 If you’ve ever had a kid “borrow” your iPhone to watch a video or play a game, you know that there’s no age requirement for touchscreen phone/tablet obsession. But while modern smartphones and tablets tend to have decent build quality and scratch-resistant displays they weren’t really meant to put up with the abuse that a toddler can inflict. Enter the VINCI Tablet.

It’s a 7 inch Android tablet with a rugged design and a sturdy bar surrounding the device to serve both as added protection and to give you and your children something to hold onto.

The VINCI Tablet also features educational software including games, storybooks, and music videos. While the tablet is meant to be child-friendly, it’s also designed for parents to use with their children, and a central app is the VINCI Diary which allows you to record your child’s growth and develop a complex by comparing your kids’ development against the norm (Are they talking when they should? Can they sort items by color yet?).

Because the VINCI Tablet has an unusual handle/safety bar built in, it’s a bit bigger and heavier than your average 7 inch Android tablet, measuring 10″ x 7.25″ x 0.63″ and weighing about 1.3 pounds.

There are two models: one with a 6 hour, 6400mAh battery and 8GB of storage, and another with a 3 hours, 32200mAh battery and 4GB of storage. Both have microSD card slots for expansion. The 6 hour version will be available August 10th for $479 while the cheaper model will run $389 when it launches next week.