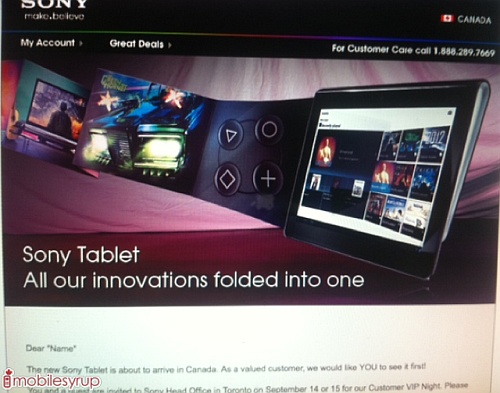 Sony has been showing off its upcoming Android tablets — the Sony Tablet S and dual-screen, clamshell Sony Tablet P — since April of this year. The Tablet S is thought to be arriving in the U.S. in mid-September, and it’s now thought that Canadians will see the slate debut at the same time.

That’s a bit of a rarity, as Canadians generally have to wait weeks or months after U.S. launches to see hot, new gadgets. That’s not always the case, however. Sony’s own Xperia Arc and Xperia Play hit retail shelves in Canada first, so it’s not a complete surprise to see the Tablet S make an early appearance north of the border as well. The leaked imaged shared by Mobile Syrup is an invite to an invite-only launch party in Toronto scheduled for September 14th or 15th at Sony’s head office.

Initially, the Tablet S will be launched in a Wi-Fi only form as the BlackBerry PlayBook and HP TouchPad did. The Tablet S features a dual-core NVidia Tegra 2 processor, 9.4 inch 1280×800 display, Android Honeycomb 3.1, and is DLNA and PlayStation certified. That means you’ll have built-in access to the gaming goodness that is the PlayStation Suite.