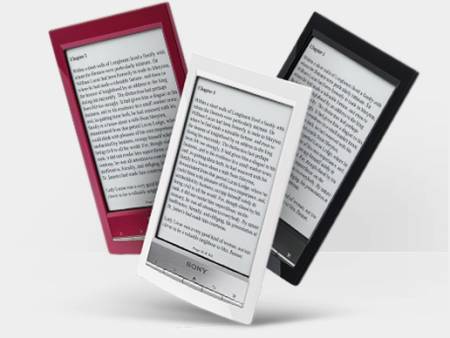 Up until a few years ago Sony was one of the key players in the eBook Reader space. It was one of the first big companies to launch products with low power, high contrast E Ink displays, and Sony offered a range of models with different features including support for touch input, different screen sizes, and more.

But the Sony Reader family stopped dominating the space once the Amazon Kindle hit the scene. That’s partly because the Kindle is tied to Amazon’s popular eBook store, but it also probably has a lot to do with price. Amazon’s eReader was much cheaper than a Sony Reader. Kobo, Barnes & Noble, and many other companies followed Amazon’s lead by introducing affordable E Ink devices, and today you can find a nice range of products for $139 or less.

Sony isn’t ready to give up though. Today the company introduced its answer to the latest inexpensive touch sensitive eReaders: The Sony Reader WiFi. It features a 6 inch, 600 x 800 pixel E Ink Pearl display, 1.3GB of storage, a microSD card slot for expansion, and a relatively affordable price tag of $149.

As you could probably guess from the name, the Sony Reader WiFi also supports 802.11b/g/n WiFi for purchasing digital books. It also lets you borrow books from a public library in the US, Canada, or the UK using a wireless connection. While many other eReaders support library books, you typically need to download them on a computer and sync them with your eReader.

Sony’s new eReader weighs less than 6 ounces and measures about 0.35 inches thick. Sony says that makes it the lightest touchsreeen eReader on the market. I’m not sure if that makes it worth the $10 premium over the B&N Nook Simple Touch or Kobo Touch, but the library book feature sounds pretty cool to me. I’m a big fan of borrowing digital books from public libraries.

There will also be a special Pottermore edition of the Sony Reader WiFi which will come with a voucher to download the first Harry Potter title from the new Harry Potter-themed website.