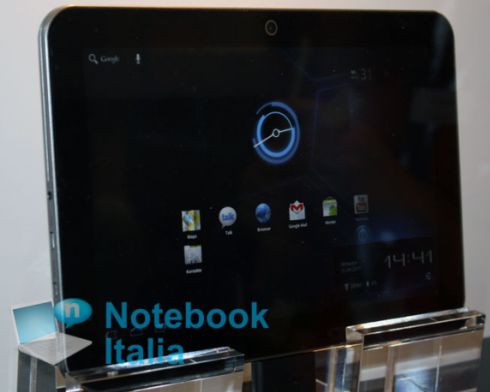 We had a pretty good idea that Toshiba was preparing to launch a new Android tablet at the IFA trade show in Berlin this week. Sure enough, the folks at Notebook Italia have already spotted one, even though Toshiba hasn’t yet officially announced the new tablet.

Toshiba’s new tablet features a 10 inch screen, just like the Thrive tablet that launched earlier this summer. But the new model is thinner than the Thrive, features an aluminum and chrome finish instead of the rubbery plastic of the Thrive, and instead of full-sized USB, SD, and HDMI ports it has mini versions of each. I haven’t seen any pictures of the back, but I wouldn’t be surprised if the new tablet also lacks the removable rear panel and replaceable battery found in the Thrive.

Detailed specs aren’t available yet, but the tablet is clearly running Google Android 3.x Honeycomb and Notebook Italia reports that it may use a 1.5 GHz TI OMAP4460 processor instead of the ubiquitous NVIDIA Tegra 2 chip.

Toshiba is holding a press event in Berlin tomorrow evening and we should know more details then.