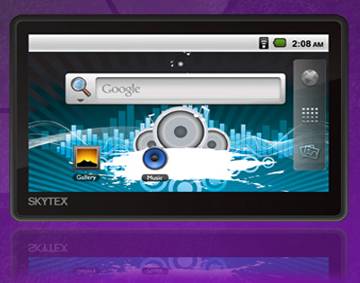 There aren’t many Android devices with 5 inch or smaller screens that aren’t phones. But today there’s one more. A company called Skytex has launched a device called the Primer Pocket, and it’s a pocketable tablet running Google Android 2.2.

The Pocket Primer joins a handful of other products which are most easily classified as Android versions of the iPod touch. Like the iPod Touch, these devices can play music and movies, surf the web over WiFi, and run a large number of third party apps. The ICE Smart, Philips GoGear, Cowon D3, Creative Zen Touch 2, and several Archos products have also had a go at this space, but none has really managed to make a dent in the iPod touch’s market share.

I doubt the Pocket Primer will either, but this little guy does have a few things going for it. At the top of the list? A suggested retail price of just $99 — making the Skytex Pocket Primer one of the cheapest Android devices around.

Unlike many other low-cost Android handhelds, the Pocket Primer has a built in mic and speaker, as well as a 3.5mm headphone jack and a 1 watt speaker.