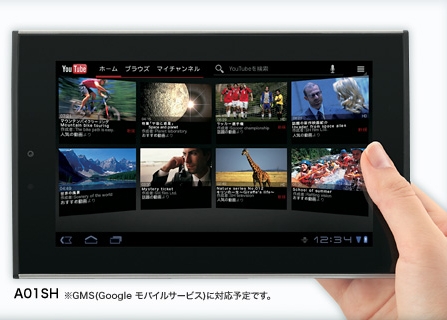 Earlier this year, Brad got to spend some hands-on time with Sharp’s 5.5 and 10.8 inch Galapagos tablets. Now, Sharp is offering a new model that splits the difference in sizes — the 7.7 inch Sharp Galapagos A01SH.

The 7.7 Galapagos is estimated to deliver 7.5 hours of “normal” usage on its battery, and it weighs in at a scant 389 grams (just under 14 ounces). That’s about 10% less than the BlackBerry PlayBook, which is roughly the same size.

The real kicker with the A01SH is that potential Japanese buyers can pick up the tablet for just $1 if they sign up for service from mobile data carrier EMOBILE. To buy the tablet outright will set you back 44,800 Yen (around $400). It launched in Japan just last week.

One reply on “Sharp Galapagos 7-inch Android tablet for $1 in Japan, on contract”