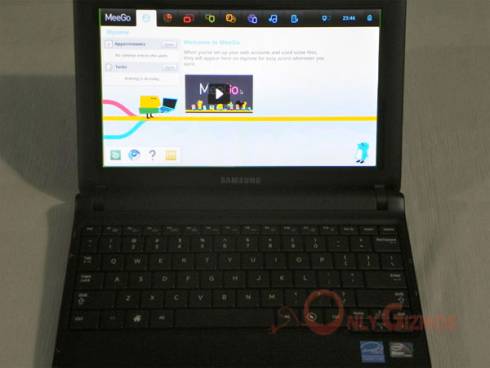 But while Asus plans to sell the Eee PC X101 in the US and other developed nations as well as developing markets, the only country I’m aware of that will get the Samsung N100 is India.

The folks at Only Gizmos managed to get their hands on the netbook, which sells for the equivalent of about $275 in India. It features WiFi, Bluetooth, and a 10.1 inch display. The mini-laptop weighs about 2.2 pounds and Only Gizmos report the build quality is pretty good.

In fact, the Samsung N100 looks an awful lot like the Samsung NC110 Windows 7 netbook I reviewed earlier this year. There are a few subtle design differences, but the laptops feature similar displays, keybaords, and other components. The key differences are that the N100 has a slower processor and runs the open source MeeGo Linux operating system instead of Windows — although there’s nothing preventing you from installing Windows or another Linux distribution if you’re not happy with MeeGo.

MeeGo is a light-weight Linux-based operating system designed for netbooks, tablets, and other devices with low power processors and small screens. It’s designed to be easy to use, even for people without a lot of experience with computers — although some power users may find the user interface a little too simple. But MeeGo includes a web browser, social networking apps, multimedia apps, and pretty much all the basic features you’d expect from a modern operating system.