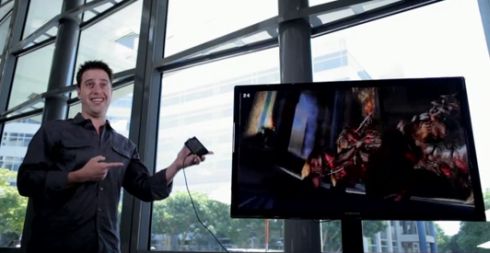 While there are some pretty impressive games available for mobile devices, they still don’t really hold a candle to the titles you can find for dedicated gaming consoles such as the Xbox 360 or Playstation 3… yet. But chip maker Qualcomm envisions a future where mobile devices do replace dedicated consoles.

The idea is that you would be able to connect your phone or tablet to a TV, maybe hook up a game controller, and play through high quality games. You could carry your gaming system in your pocket and play games while you’re riding a bus or play on a big screen while you’re at home — or at a friend’s home.

I’m a bit skeptical, because Qualcomm’s strength is in making low-power chips that offer long battery life. The makers of graphics chips for gaming consoles that you plug into a wall jack will always have an advantage because they don’t have to make energy-sipping processors. Then again, there’s increasing demand for low power home appliances, so perhaps we could see a similar trend in gaming consoles in the future. It costs less money to run low power devices, and it’s better for the environment.

While games designed for the latest low power ARM-based mobile chips look better than PC and console games from a few years ago, I don’t imagine the chip designers working on the next-generation gaming consoles are going to sit still. But progress tends to be slower in the dedicated console market than the mobile market. New mobile chips tend to hit the streets every year or so, while game consoles such as the Nintendo Wii or Xbox 360 are meant to last for around half a decade.

Qualcomm is also making the case that developers will largely move from console and PC games to mobile because it’s cheaper and easier to develop for mobile platforms while there’s a lot of money to be made — even though mobile games for Android, iOS, and other recent platforms tend to sell for $0.99 to $9.99 rather than the $50 to $60 game makers charge for console games.

What do you think? Do you see mobile phones and tablets replacing dedicated gaming consoles one day?