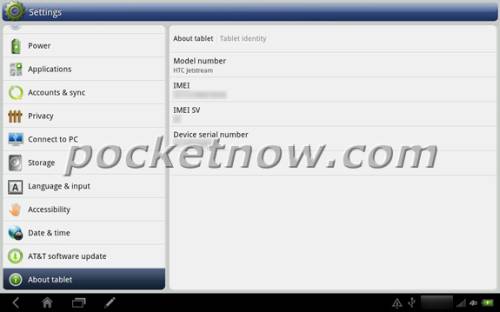 HTC’s upcoming 10 inch Android tablet will be available from AT&T as the HTC Jetstream. For the past few months we’ve been seeing leaked photos and software screenshots of a device called the HTC Puccini, but it appears that was simply an internal code name.

But according to the latest leak, courtesy of PocketNow, when the tablet actually hits the streets later this year, it looks like it will be called the Jetstream, or at leas that’s what the AT&T version will be called.

AT&T will offer the 10 inch tablet with a 4G LTE radio for mobile broadband access. The tablet will run Google Android 3.x Honeycomb and it’s expected to launch later this year.

HTC is expected to offer the tablet with a capacitive multitouch display and a digital pen for writing and drawing, much like the one that comes with the HTC Flyer 7 inch Android tablet.