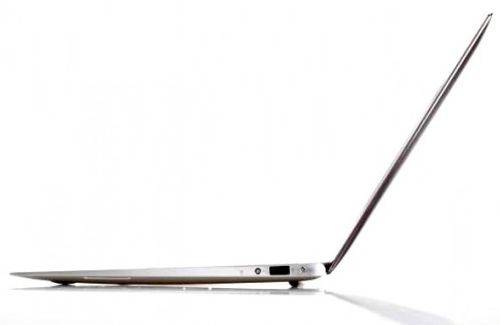 This summer Intel unveiled a platform for a new type of portable computer that would combine some of the best elements of a netbook with those of a full sized desktop-replacement laptop. The so-called “ultrabooks” would have screen sizes between 11 and 13 inches, use the latest low power Intel chips (but not the uber-low power Atom processors), and measure less than an inch thick.

But the key to Intel’s vision for the ultrabook is the price. While the chip maker doesn’t envision ultrabooks selling for under $300 the way many netbooks do today, the company wants the thin and light laptops to be affordable, with price tags under $1000. This would allow them to compete with Apple’s MacBook Air, and possibly even with thin and light tablet computers.

There’s just one problem. Computer makers have been releasing thin, light, and powerful laptops for well over a decade: and they usually cost an awful lot of money. While netbooks cut corners by using low-cost components, a high quality ultraportable typically costs an arm and a leg because they’ve relied on expensive components.

So far not a single ultrabook has hit the market, and the word on the street is that if and when they do start to appear they’ll cost significantly more than $1000.

But Intel thinks it’s definitely possible to produce ultrabooks in the promised price range. According to Digitimes, the company has put together a few blueprints for PC makers that could allow them to build systems for between roughly $500 and $700. This would allow device makers to sell notebooks for between $700 and $1000 and still make a profit.

That still begs the question of whether consumers will consider ultrabooks to be bargain devices just because they cost less then $1000.

Folks that value portability over performance have been snatching up cheap netbooks for the last few years. But I’m constantly amazed how frequently people try to compare a 2.8 pound, 10 inch netbook with a 6.5 pound, 15.6 inch laptop. While you can find both for around $300 these days and the larger laptop certainly gives you a larger keyboard, higher resolution display, larger hard drive, and faster processor, the tradeoff is that you’ll get a backache carrying it around all day. You’ll also probably be lucky to get 3 hours of battery life.

Still, I hear the comparison often enough that I have to wonder whether computer shoppers will look at ultrabooks and think “Hmm, I could buy three netbooks for the same price” or “Hmm, I could buy a full-sized laptop with twice the processing power for half the price.”

That’s not to say a 3 pound laptop that measures less than 0.8 inches thick and has the latest Intel Sandy Bridge processor or an upcoming Ivy Bridge chip isn’t worth $900 or so. I’m just not convinced ultrabooks will fly off the shelves even if Intel can convince PC makers to build and market them.

Asus and HP will likely be the first two companies to launch ultrabooks. I suspect other laptop makers will be watching these launches closely to gauge interest in the product category, but if Intel can make a persuasive argument that ultrabooks don’t have to cost very much to build, we may see more manufacturers jump on the bandwagon.