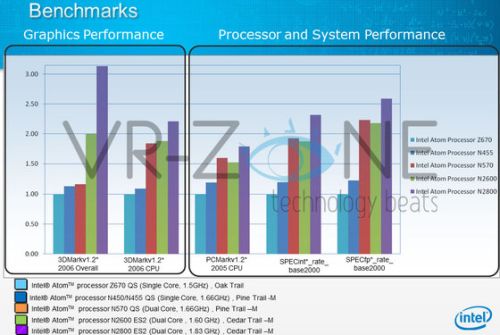 Intel’s Atom processors have never been speed demons. They weren’t meant to be. Instead, these are low power chips designed to offer long battery life and modest performance that’s good enough for basic computing tasks. They’re also designed to be cheap, which is why they’ve been the popular choice for PC companies building low-cost netbooks.

But this emphasis on energy consumption rather than performance explains why there’s been so little change in the performance of netbook chips over the last 3 years. The differences in benchmark scores for the Intel Atom N270, N280, N450, and N455 processors are hardly noticeable.

Things started to look a little better last year when Intel started releasing dual-core netbook chips such as the Intel Atom N550 and N570, which tend to perform much better on tasks that can fully take advantage of multi-core processors. But 3D and HD graphics performance has been pretty stagnant… until now.

VR-Zone has published some of the first benchmarks of Intel’s upcoming Cedar Trail platform. The next-generation Intel Atom chips are designed for netbooks, and they score 2-3 times higher on the 3DMark06 benchmark than any Atom processor available today.

That’s really not saying much, since competing chips such as the AMD E-350 score much, much higher. But at least Intel is finally ready to offer an Intel Atom chip that offers noticeable improvements over a previous-generation chip.

All told, it still looks like AMD has the better platform for low power, moderate performance laptops at the moment, offering better graphics and CPU performance while still allowing for reasonably long battery life.

But Intel’s chips still use substantially less power than AMD’s processors, so if every watt counts to you, Intel may still offer some advantages. More importantly, Intel has strong relationships with netbook makers, so we’ll likely continue to see Intel chips dominate the low cost mini-laptop business for the foreseeable future.