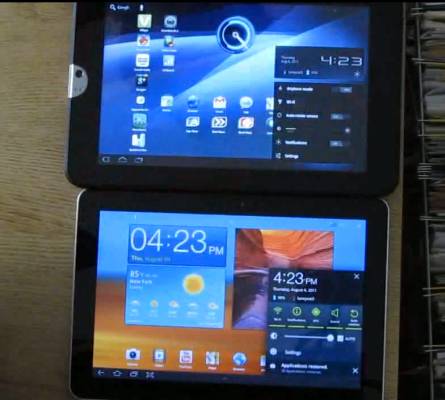 I got an early version of the software update yesterday and I’ve been playing with it for a little while. 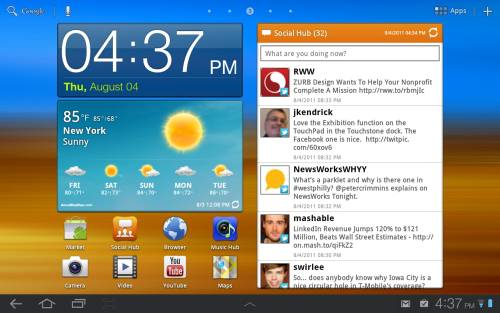 For the most part, Samsung seems to have done a pretty nice job. While some folks will likely consider TouchWiz to be bloatware, I think the Social Hub app for viewing all of your social networking information in one place is actually pretty nice. I like the improved Quick Panel which offers access to more Android settings than you get from Google’s default panel. And… well, I haven’t decided what I think about the Mini App Tray yet.

On the one hand, I can see how launching little apps that run on top of other apps could be useful — especially apps such as the calendar or music player which you might want to see while your surfing the web or checking your email. On the other hand, I’m a little frustrated that you can’t disable the app tray if you don’t want to use it, or customize the apps that are shown on the tray.

I don’t happen to have a Galaxy Tab without TouchWiz handy to do a side-by-side comparison. But I do have the next best thing: a tablet with similar specs. Both the Galaxy Tab 10.1 and the Toshiba Thrive feature 1 GHz NVIDIA Tegra 2 dual core processors, 10.1 inch, 1280 x 800 pixel displays, and Android 3.1 operating systems. While Toshiba loads a few custom apps on its tablet, for the most part it runs the version of Android that Google designed with no real system-level tweaks.

This video shows some of the similarities and differences between the stock Android Honeycomb experience and the TouchWiz experience.

I didn’t want to post a 30 minute video going over every last feature in TouchWiz, but hopefully the video gives you an overview of what TouchWiz brings to the table… and whether it’s something you want or not.

One reply on “How TouchWiz compares with plain old Android 3.1: Video”