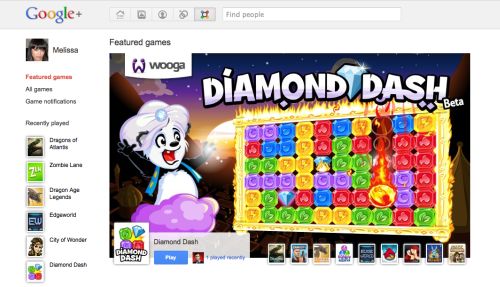 Google has begun rolling out a Games page for members of its Google+ social network. Games aren’t available to all users yet, but once it’s available you should see a new icon next to the Circles tab above your Stream that lets you visit the new page.

From there you’ll be able to see game updates from people in your circles, view invitations to participate in games, and view high scores and other game achievements. You can also make your updates visible to members of your circles — but Google is emphasizing that these won’t show up in regular streams. Users will only see them when they click on the Games tab.

In other words, Google+ users won’t be constantly spammed with requests to tend their friends’ farms or participate in various “wars” unless they’re already planning on playing games.

In addition to the kind of turn-based social games we’ve seen on other social networks, Google+ Games will include some popular web-based games including Angry Birds and Bejeweled. There will also be a poker game, and a Soduku game at launch, among others.

Of course, you can play many of these games on your own in any web browser without using Google+, but by using the social networks’s gaming system you can keep track of your scores and other accomplishments and share them with friends — and also see what games your friends have been playing.

As the initial excitement over Google’s new social network starts to fade, the addition of games may be a way to help keep the romance alive — especially since Google seems to be actively courting developer of high quality third party apps while taking steps to make the experience of using them a little more pleasant than on some other social networks.

What do you think? Will games enhance the Google+ experience, or are you happy with your Facebook games, or with your sad social gaming-free existience?

Update: Facebook is fighting back, launching a major update to its own games platform. This includes support for full-screen games, real-time game activity alerts, and more. Some of the changes sound like the exact opposite of Google’s implementation — you could end up seeing more annoying alerts about games your friends are playing whether you care or not.

One reply on “Google+ got game”