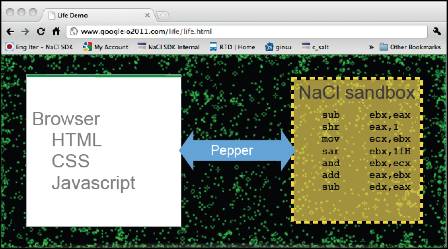 Web apps have come along way in the last years, letting you do many things in a web browser that you could previously only do in a desktop app. We can play games, compose documents, or even edit photos or audio using a web browser. Recent advances have even made it possible to create web apps that work even when you’re offline, allowing you to download eBooks and read them on a plane, for instance.

But the programming languages developers use to write native apps and web apps are different, which can make it difficult to port apps from one platform to the other. Google wants to change that. This week the company added a feature it calls “Native Client” to the beta version of the Chrome web browser.

Native Client allows the browser to run apps written in C and C++. There are security features in place to prevent those apps from harming your computer, much as there are with JavaScript.

It should be interesting to see whether the move will prompt desktop and mobile app developers to offer browser-based versions of their apps. While Google’s Chrome browser has grown in popularity over the past few years there are still more people using Internet Explorer of Firefox, which means that there’s a limited market for web apps that only run in Chrome — although that limited market is still much bigger than, say, the market for webOS or Windows Phone 7 apps.

The latest beta version of Chrome also includes a new JavaScript API that adds support for advanced audio features such as spatialization or room simulation which will come in handy for developers writing web-based games.