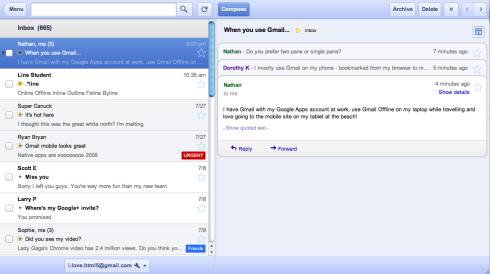 Google Chromebooks such as the Samsung Series 5 and Acer AC700 just got a little more useful. Google is introducing offline support for some of its most popular web apps when you’re using Chrome OS or the Chrome web browser on a Windows, Mac, or Linux computer.

Today you can already install Gmail Offline beta, a web app that’s available from the Chrome Web Store. This will allow you to keep using Gmail even if you lose your internet connection. Just choose the Gmail Offline icon from the new tab page. This will let you read messages, write replies, and compose new messages. When you go back online your data will be synchronized. Gmail Offline also lets you search your messages or delete or archive messages.

The web app is based on the Gmail web app for Android tablets — and it looks like it. When you load the app you’ll see the tablet user interface instead of the typical Gmail user interface for notebook and desktop computers. The app is still in beta though, so we may see some visual improvements eventually.

The Calendar and Dcos apps should be available within the next week or so.

The three new apps mean that a Chromebook laptop which only runs a web browser is a little more useful when you’re on an airplane, in a subway, or in another environment where you simply don’t have an internet connection.

Chrome OS also lets you play music and movies from local storage or an SD card, and a native image editor is on the way. Just because Chrome OS is designed to run web apps instead of native apps doesn’t mean that it only works with an internet connection. Or at least that’s the idea. So far the reality has been a bit different, as there aren’t that many web apps available that support offline use, but as today’s announcement shows, that’s starting to change.