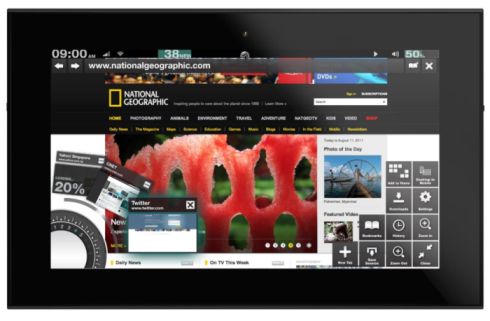 The Grid 10 is an unusual tablet with an operating system called GridOS that’s based on Android… but Fusion Garage insists it’s not just another skinned version of Android (even though it can run Android apps). Instead GridOS features a unique home screen and app launcher which allows you to organize all of your apps on one infinite screen that you can scroll through to find the apps you want.

The tablet has a 1366 x 768 pixel display, which gives you a few more pixels than you’ll find in most 10 inch tablets running Google Android Honeycomb, but it uses the same NVIDIA Tegra 2 dual core processor as competing tablets from Samsung, Motorola, Acer, Asus, and Lenovo.

While it’s interesting to see a company taking an innovative approach to the tablet space, there are a few reasons to be skeptical. First, Fusion Garage is the same company that brought us the ill-fated JooJoo. Second, the Grid 10 is one of the most expensive Tegra 2-based tablets around. And third, it appears that tablets without Android or iOS operating systems might not be all that popular with consumers.