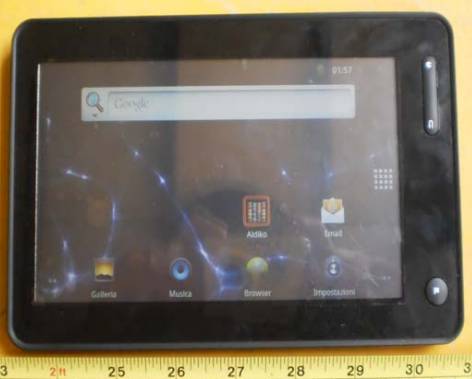 The IMID77T is a new 7 inch tablet from Chinese device maker Flastar. I seriously doubt it will be sold under that name if or when it’s released in the US, but the tablet showed up at the FCC today. For the most part it looks pretty unexceptional, but it’s one of the few Chinese tablets I’ve seen running Google Android 2.3 Gingerbread.

We probably won’t see cheap tablets from China running Google Android 3.x Honeycomb anytime soon. But Gingerbread is probably the next best thing at this point.

The tablet has 256MB of RAM, 4GB of storage, and a 3400mAh battery. It has a 7 inch, 800 x 480 pixel TFT LCD touchscreen display. There’s no mention in the user manual of whether the touch panel is resistive or capacitive, but there is a slot for a “touching pen,” or stylus, so my guess is resistive. That means the screen will likely respond better to fingernail or stylus input than fingertips.

The only other distinguishing features are the rather oddly-placed buttons, with Home and Back keys grouped together on one side of the tablet and a Menu button standing all by its lonesome at the other end.

There’s no word on the price, but I wouldn’t expect this tablet to cost very much.