HTC has been pretty quiet about its upcoming tablet plans, but we’ve already seen pictures and FCC listings of an upcoming 10 inch tablet that may or may not be called the HTC Puccini. It’s expected to have a dual core processor, digital pen, and Android Honeycomb operating system. 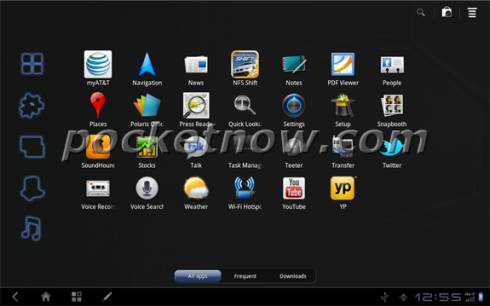 Now the folks at PocketNow have obtained some pictures which may show the tablet’s software. It appears that HTC has skinned Google Android by adding its own icons to the toolbar at the bottom of the screen, much as Samsung has done with its TouchWiz software for the Galaxy Tab 10.1.

There are also extra icons along the sides of the Apps menu which seem to provide a preview of what you’ll see when you slide to the next screen. You can also sort apps by all apps, frequently used apps, or downloaded apps (as opposed to software that came preloaded with the tablet).

HTC’s software keyboard looks a bit like the one we spied in a leaked image of the Sony S1 tablet’s software recently: Both have numeric keypads on the right side of the screen. This means the letters are cramped closely together, which could make 10-finger touch-typing difficult, but I haven’t found a 10 inch Android tablet that really works for touch typing yet anyway. Two-finger typing seems to be much easier.

You can find more images at PocketNow, including pictures of the settings screen, keyboard, and setup menu.

One reply on “First look at the HTC Puccini tablet software?”